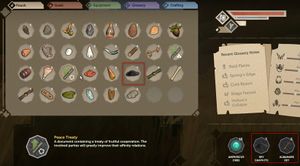 The statement "Key Graphite does not take up space in the player's pouch" is wrong. I can't remember the exact maximum number it can hold per slot (possibly 10) but the screenshot below is showing that in the early game it does indeed take at least one slot in the pouch.

I do remember the pouch slot holding key graphite is freed up later in the game but I can not recall what triggered it. It could be after a certain amount is collected, or when the pouch get its second upgrade, or after a given amount of Albamare keys are crafted. Before more research can be done I feel it is better to remove the wrong statement entirely rather than to add hypothetical suppositions in the article. -- Wikiscout (talk) 18:27, 28 October 2019 (UTC)

From what game version is that screenshot? There was a bug introduced with Version 1.0 that wasn't there with Beta 3 and that was fixed with Patch 1 regarding Key Graphite wrongly being in the pouch instead of Important Items. -- Istador (talk) 18:49, 28 October 2019 (UTC)

The screenshot is taken from this video at 3h 26mn 24s. It was uploaded on the 16th of October which is post Patch 2. Although unlikely it is possible that the player did not update his game, or the video was recorded before Patch 1 was released. It is also entirely possible that the bug was reintroduced post Patch 1. One would have to restart the game with the latest patch to make sure the bug has been fixed once and for all. -- Wikiscout (talk) 20:12, 28 October 2019 (UTC)